Boxberg Power Plant and the surrounding open-cast mines have long been important to the supply of energy in Germany, as well as to the people and the region. The power plant is today the second-largest in Germany with a yearly average output of 15,600 GWh of electricity. In 2006 the decision to expand the Boxberg coal–fired power plant with a new unit was made.  During 2011, the new power plant unit will be connected to the power network.

The construction of the new lignite power plant in Boxberg, Germany, is one of the most challenging projects Harsco Infrastructure has undertaken in recent years, both in terms of formwork and scaffolding. Sophisticated load bearing structures created from the MODEX® modular scaffolding system provided significant savings in time and cost in the construction of the main beams. Instead of bracing the building completely using ID 15 framework supports at every level, forces were transferred using MODEX towers arranged at selected points. In this way it was possible to start other work on the lower levels before the final story was completed. Even where the production of the main beams demanded a working platform outside the building, this could be achieved without difficulty using MODEX system components.

To view the picture or slideshow, please click on the image. 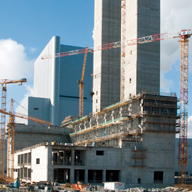